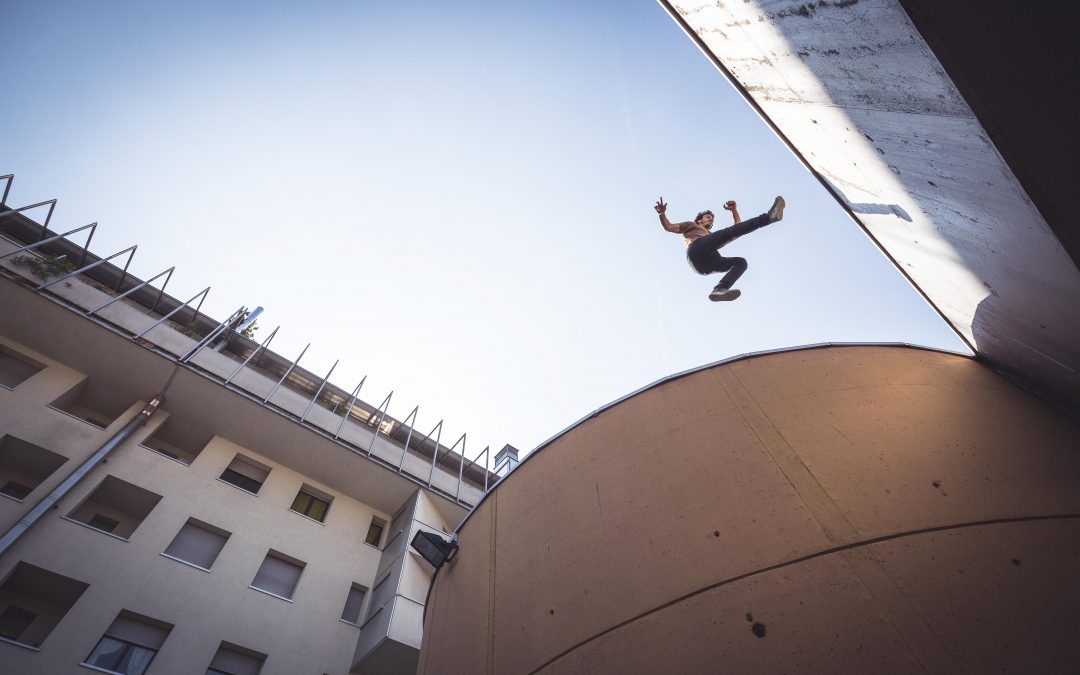 I see people every day boringly walking the roads or navigating into traffic, totally ignoring all the scenarios surrounding them. Leaving to die infinite possibilities for one’s development.

Environmental Practices: What is this about?

“We open our eyes, see the beauty of the day, marvel at the insignificant, rejoice in the mundane, and allow every moment to be full of meaning. When we are scared we know we exist. Life, previously taken for granted, becomes the most cherished treasure”.

The Bodivoodoo, on a crusade against a modern overprotectist society. (1)

With “Environmental Practices” I refer to all movement practices developed in a relationship with space, whether that’s in a city or in a natural setting. We live in a space, whether we want it or not. We can choose to ignore it, or we can use it to grow.

Buildering walls, traversing pipes, walking pavements, rolling on floors, flowing on concrete blocks, brachiating on trees, standing on high poles, biking through traffic, balancing on rails and chains, squeezing through fences and so on are all scenarios of the interaction.

“You must walk around rails rather than on them”.

Fixed descriptors of reality are used to build stability in society, however, stability kills challenge and if you kill challenge, good luck with that, it will be like killing the ultimate essence of being human. Get back to tabula rasa.

The reality, if faceless, becomes plastic, allowing creation and dynamicity rather than passivity and dogma.

The façade of a supermarket becomes a climbing gym, the cramped roads full of traffic become the pulsating veins of a macro-organism.
Pipes carrying gas and water on the side of hotels are a web to sit to watch the life silently passing by; the manholes to the sewers are portals to another dimension full of mysteries underneath the cities.

In my research, I have extrapolated elements coming from different fields to then connect them together, with the aim of maintaining the same alchemy of old disciplines, projected into their contemporary shape.

Motives to dive into the environment:

Many people (in extremely recent and documented history) realized the power of interacting with the city.

The main drivers that started these actions have been many through time. Since I have no intention to bore you, oh modern reader, I’ll go through some, just to get my point across.

In Parkour/ADD the Yamakasi at the end of the 80’ were using suburban complexes as a place for discovery, self-expression and search for personal identity (2). They realized that games, challenges, and problems to solve within a given space, could lead to their inner development. Thus, helping to build antifragile bodies and unbreakable minds. In pills, it gave them the motive to wake up every day to face the reality, creating a system of values to help them face life.

In the same period, Don Jean Habrey, founder of Combat Vital was looking for an un-domestication of modernity (3). He was convinced that an open mind towards experiments with the surroundings, refusing comfort and routines will lead to a deeper and more meaningful and aware existence. Adventuring in an “alive” city is a starting point and it constitutes an infinite source of energy.

Bradley Garret in his book’s “Explore Everything” (mixing words from the Situationist International leader Guy Debord and Peter, an explorer), gave one of the best definitions I have heard regarding Urban Exploration (4).

“It is at the same time a subversive response to the late capitalism that encourages spectatorship over participation and just a bit of fucking with people’s heads to help them understand how much they are missing every day”.

This silent revolution has started many years ago and it’s not going to stop. Digging to find more information, I realized it was everywhere: from the Cave Clan in Australia (1986) to the Diggers of the Underground Planet in Russia (1990). In the USA, from the LTV squad in Brooklyn, NYC (1989) to the San Francisco Suicide Club (1977). In Europe, from the Berlin Underground Association in Germany to the Urban Experiment in Paris. And the list goes on and on, but I will touch upon it in a future article.

Why were they doing it? Well, reading through their manifesto one thing appears clear: because the environment is THERE. And the option to go figure out that space, simply exists. And yes, that is enough to make people take the chance to explore.

I am going to release every week a piece both of a story and a practical session that can be added to all these practices in order to understand them and open the eyes towards a more creative use of the environment. We will explore risk and responsibility, tools for experimentation and an introduction to many practical methods for development.

Facing the deepest fears, exploring the darkest alleys, climbing without a way down, balancing in a world of almosts, ultimately becomes a venture into our own selves.

Get ready and see you next week,
Marcello.

*Pic By Andy Day in a photoshoot for ParkourWave