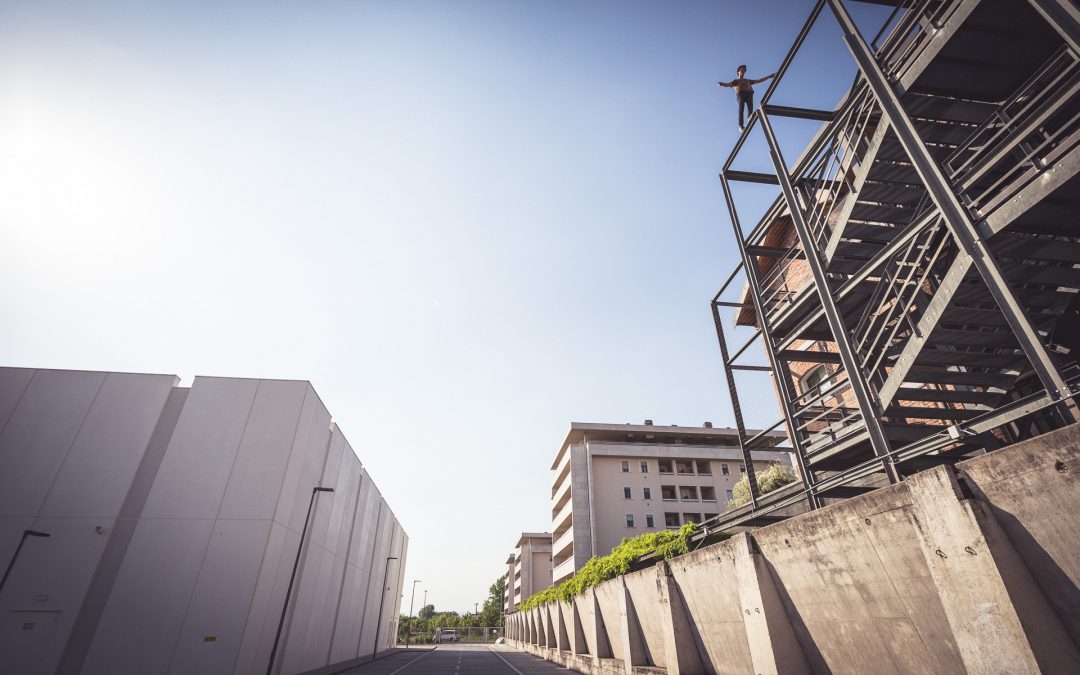 The previous article briefly described the concept of fear, as an automatic response unconsciously activated by the individual in the case of a potentially dangerous stimulus or situation.

As previously underlined, there is not much that can be done to “avoid” triggering the neural circuits associated with fear, nor it is safe or wise not to listen to its call.

Fear makes our senses sharper and our bodies more ready to face the unknown. 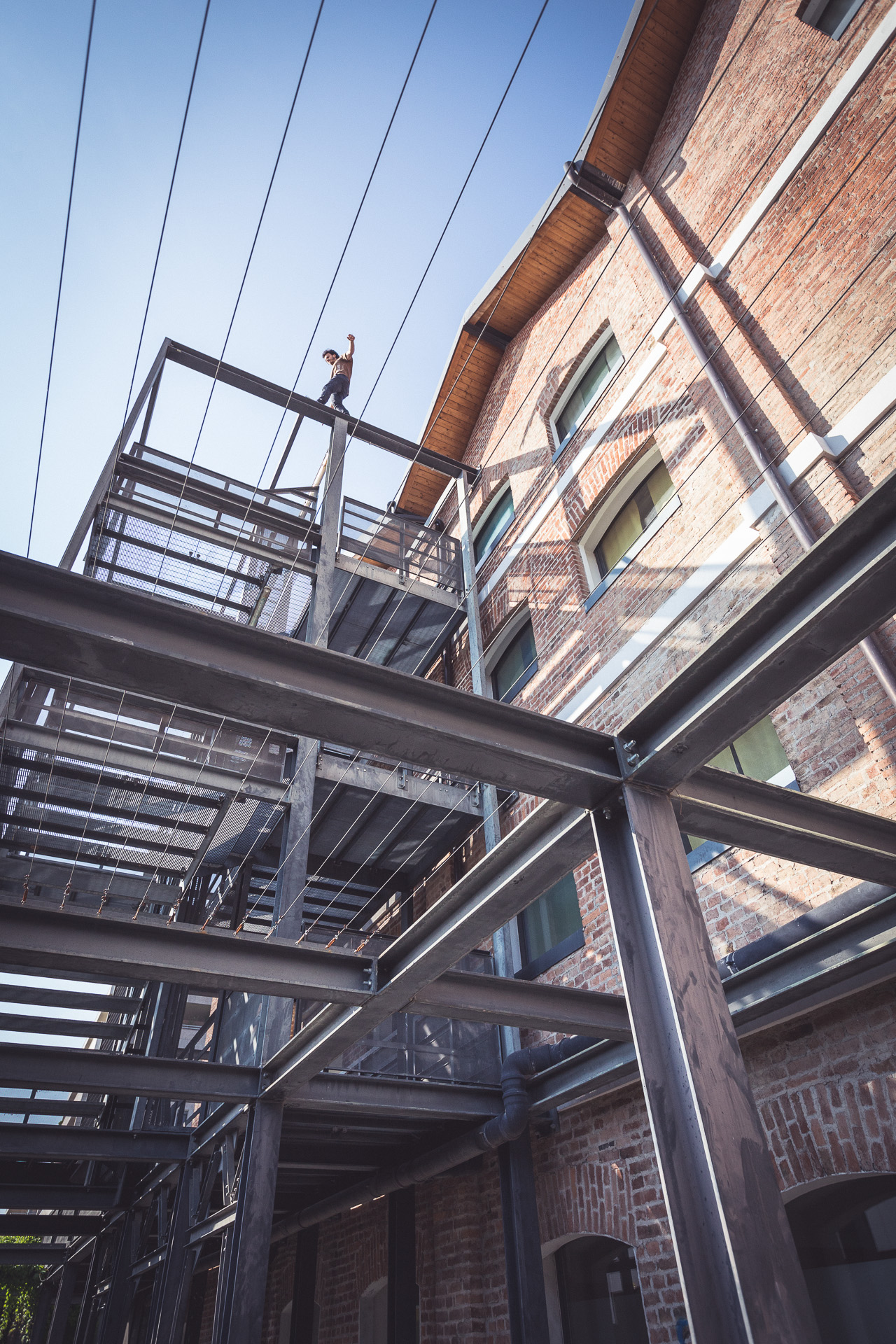 However, if acute fear is overwhelming and excessive, the system becomes impaired, so that “events that are interpreted as threatening, activate the hypothalamic-pituitary-adrenal axis and thereby initiate so-called stress reactions” (1).

A lot of complicated words to say that the fear-response system becomes more useless than a cockroach floating upside down in a pool.

For example, the body won’t bother releasing all the sphincters and expelling everything possible, saying goodbye to fine motor coordination all the way to making any action impossible due to paralysis.

So, being able to control and channel the responses of the body is essential. A good process into this world can open possibilities to various activities that will ultimately lead to the development of a stronger mind and a more adaptive body. But how can we be sure we are not stepping over the line and we are working in the right area for our development?

Here is a matrix that can be of help in understanding where to spend energies and time to produce positive adaptations: 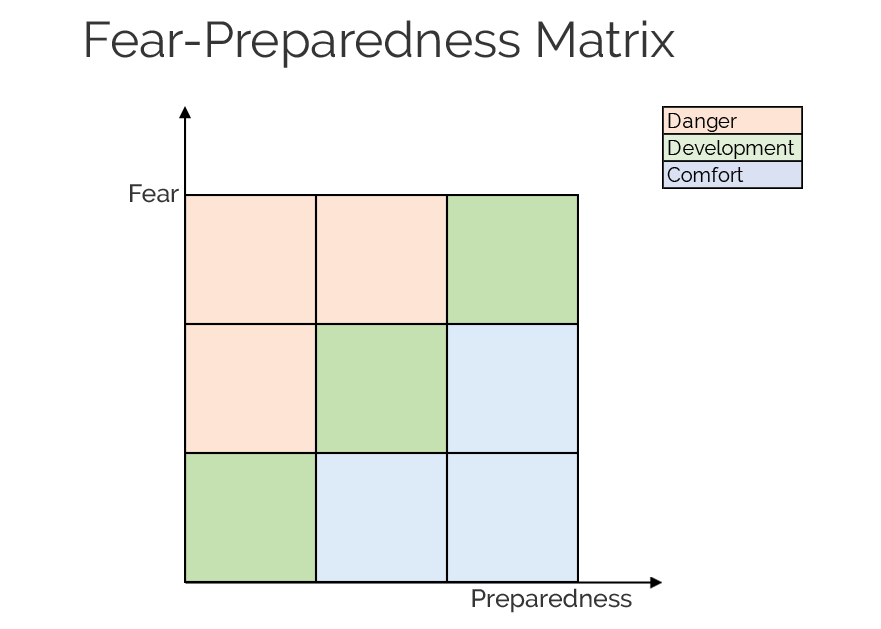 The matrix underlines that, for a given stage of fear exposure and preparedness state, there is only a limited amount of situations that can allow growth.

If the preparedness of a person is very low, the fear to which that person can be exposed must be low; failing to do so can produce an impaired state, at times creating long-term damages on the body or augmenting the so-called fear of fear.

I.e. Amber is learning how to balance on a rail. Practicing ground level would be necessary to ensure her development. If the whole process started on a high bridge, nothing good could have come out of that situation, in the first place. She would have probably frozen at that height before slowly climbing down the bridge – in a moment she would have associated rail balancing to a bad experience precluding to herself a whole branch of personal development.

As the preparedness gets “bigger” in value the fear exposure can go hand in hand with it. On the other hand, a new riddle arises. With more tools to face the problems, comes the risk to sit in the comfort zone, producing no more adaptations in the system.

I.e. Luke is an experienced fighter – lightly sparring over and over again without ever going into a real fight will leave him both without a reality check and without an understanding of the deepest layers of his practice.

For today, that is all. Remember – Don’t be crazy but don’t be lazy. Start from manageable, controlled and expected situations not to drown in a sea of chaos. With time move into harder and unexpectable scenarios where you level of skills can be tested and progressed.

In the next article, I will present the basic elements of which this “preparedness” I have been talking about is comprised of and I will discuss the two main methodologies that I have been implementing during the years for the development of my students.

Until next week,
Marcello.

Fear has been vastly considered in its evolutionary perspective, from Darwin’s “On the Origin of Species” to the most recent studies of Evolutionary Psychology.

When mentioned, fear appears to be by four main features:

–       It is activated as a response to potentially dangerous stimuli or situations;

–      It originates in a specific area of the brain: a neural circuit that has the amygdala as one of the greatest contributors.

The amygdala is part of the limbic system, which is responsible for the elaboration of emotions, , motivations, and memory. As a matter of this fact, impairments in this area have been correlated with overreactions, inability to known objects and to accurately respond to fear-related stimuli until complete loss of fear.

The basic mechanisms of fear similar in animals and humans, and neural circuits in the brain of mammals have been considered by scientists and authors to identify how our brain detects fear and how each individual responds to a dangerous situation. This is the reason why the concepts of Fear and Preparedness are frequently considered together. Where one concerns experiencing fear trough the model presented above, the other refers to the ability an immediate and relevant response when the situation requires so. Therefore, it’s not enough to experience “fear”; appropriate reactions need to be elicited.
The role of memory in this complex system is crucial. Once a situation or an object has been registered in the brain as dangerous, the individual will tend to automatically respond in a similar manner to “stimuli that are perceptually close to an event that predicts adversity, a phenomenon known as fear ”. This process potentially helps the individual to respond faster and more efficiently, making each organism more easily adaptable. Fight or flight. It doesn’t matter which side you pick, but you’d better pick it fast

In the past, this automatic mechanism was capable of determining survival in potentially deadly situations and its evolutionary value is deeply-rooted in the most ancestry and buried parts of our brain. This is the reason why we all experience it. 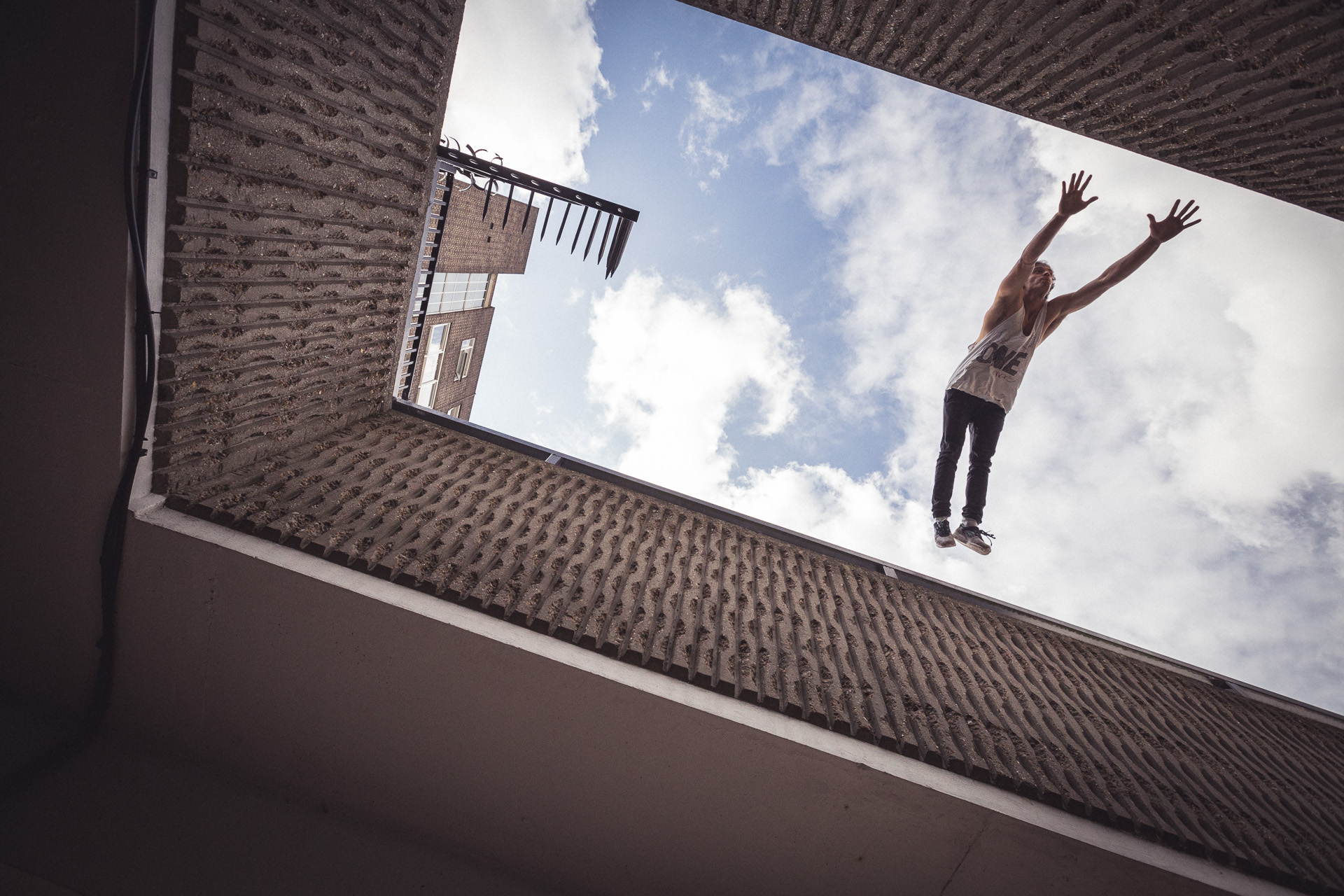 When it comes to experiencing fear in a movement context, gradual exposure is required to allow the person to work on the preparedness level. As we have seen, fear cannot be controlled, but preventive measures can be taken to provide the mind a concrete sense of manageability of the circumstance.

For those who practice parkour, this is even more understandable. Jumps that seems too scary to be tried can become manageable as the preparedness increases. It is not that the fear all of the sudden disappears. However, understanding that those emotions can be controlled can help the discomfort and create a pattern of effective management through memory.

There are different ways to channel fear and optimize this process. The individual level of expertise surely influences the ability to react to distress and fear, producing accurate responses. And with the level of expertise, I do not mean how far you can jump. It is more about: how much time did you spend pushing yourself outside your comfort zone? Have you ever worked on practical ways to handle stressful or potentially dangerous situations or you kept avoiding them?

Thanks to Arianna (BSc in Educational and Developmental Psychology) for the help in cracking this riddle and for being an inspiration and a model on many layers. Oh, and for being my life partner, of course.