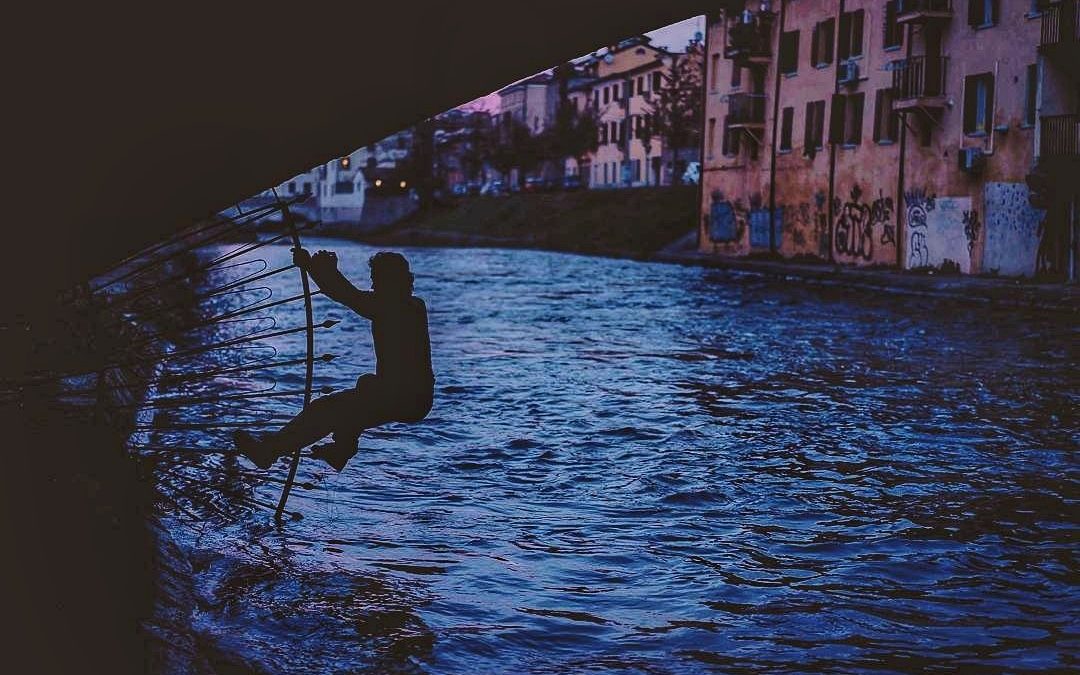 Urbex is the art of carefully and thankfully making tea in somebody else’s villa, bringing pots, leaves and water of your own, without them noticing.

A preamble: why more manifestos?

All people act but only a few do it following personal Cartas or codes. Mostly, things happen in a flowing continuum where possibilities are evaluated and picked in order to get the best outcomes out of a situation. The problem with this process? On spot, logical decisions are strongly influenced by sensations and instincts. Needless to say, this tornado of emotion can produce poor immediate strategies.
From as long as politics was born (more than one people in a room), laws started to arise to avoid people working only towards their own genetic egoistic needs.

Given the rate of analphabetism of the past, it was an absolute necessity that everyone would have blind rules to follow. An understanding wasn’t necessary, the important thing was that people were acting in such a way that peace and order were maintained. No thinking nor grey scales, just black and white.
In this sense, social control provides crucial guidance: a set of regulations and coercion rules are aimed at maintaining the order within a given association, culture or population. Thus, distinguishing unacceptable conducts from the acceptable ones.

Nowadays, many are the driving forces that contribute to support and preserve the idea behind social control and formal processes are only one of them (criminal justice laws, punishment, and deterrence).
The increased application of education and schooling programs enhanced individual critical thinking as well as the ability to resonating around thorny topics. Informal processes took the lead: education, family, morality, and values are now equally strong forces in modulating individual behavior.

By my side, I have strong ethics and moral codes for many things I do. I can predetermine my actions and align facts with reality not to have any bad surprises along the way. For example, in my life, I choose not to steal, it’s a matter of respect. Similarly, I understand the value of propriety as one of the means to achieve peace and social balance.

Therefore, when finding myself in a situation in which stealing would be really easy (e.g. I see a 500 € note fall off the pocket of a person rushing in front of me), I simply avoid it (I’d run towards the person to give them back the money since they are not mine).
I do this not because I am scared of the effect that my actions may legally have (being fined, going to prison or being punished in general) but because my beliefs and understanding would guide my choices. Not doing something only because of the consequences, is for the poor minded people, that do not have internal principles to align to.

That is the reason why I am writing different manifestos to put out there, ink on paper, my declaration of intent. Doing so, I can stay true and transparent in the things I believe in and that drives my actions.

The core of the matter

Exploring surroundings and using space involves in a nutshell scouting challenges, researching the relation with an environment, living authentic experiences and observing the most beautiful transient treasures that the world has to offer from the front seats. Sunsets and sunrises from the top of a building, cascades and rivers in the core of the earth, the street lights in a pulsating city or the bright stars in a night without moon are all part of the same book.

Although most of these activities occur during the day in public areas, some others still happen at night, in silence and in off-limits scenarios. It’s enough to think of the incredible catacombs in Paris, the underground Tube Tunnels in NYC or the London Sewers net (besides some occasional “close encounters of the turd kind” (1), every mission holds nice surprises). They cannot be explored in ease, but aren’t you curious to give a look to see what’s hidden in there?

Having said so, trespassing, aka invading other people’s properties, shouldn’t be done lightly and that’s why a manifesto is also needed in this case.

Redefining the starting point: one axiom.

In full understanding that private property is of extreme relevance for social balance, justice, efficiency, and unity but knowing that I value self-regulation and internal processes more than external control systems, I set this as a founding axiom of my practice:

Within any urban and natural scenario, there are no impassable boundaries.

A city is of its citizens and nature is of those who inhabit it.

This axiom ceases immediately to be true if the undermentioned rules are not satisfied to the fullest.

“When we interfere with nature, regardless of whether our intentions are good or not, we create a break in [that] natural history” (2). Do not disturb people and people won’t disturb you. The first law of the jungle. Remember you are doing things for yourself and yourself only.

This idea closely resembles the environmental “preservation principle” by Regan, which was aimed at promoting “non-destruction, noninterference and non-meddling with nature” (3).
Similarly a few years later, Taylor (4) continued saying that ‘we must not try to manipulate, control, modify, or ‘manage’ natural systems or otherwise intervene in their normal functioning’.

Take this to an extreme. Look at the beautiful global warming issue that we are facing nowadays (2019). Never underestimate the power of a non-interference mindset.

One of Aristotelis’ main arguments in defense to private property was that “communal ownership increases the likelihood of neglect”. Therefore personal possession allows the whole society to be more efficient (5).

Having said so, this cognitive bias highlights that if you are in an area of the city that is not your garden or your neighborhood, you will most likely think that somebody else will take care of a problem that you might have created.

Being aware of this is essential to act as if everything belonged to you. Would you ever break the glass of a window to get inside your house? You wouldn’t, then why consider it? Move on.

Always pay respect for other people as if they were your sisters and brothers. Karma will give you this back.

Do everything you have to do to protect your structural integrity; in a few words: do not harm yourself. We are not daredevils, we apply our skills (previously built) to open up possibilities, we do not jump into danger. It’s a process, a very different thing.

Regarding others, always remember this statement: “The issue of self-protection does not, however, exclude the use of force in protection of life” but to be legitimate “it has to be justifiable,
and not disproportioned to the force threatened. A person, with a justifiable cause, could use force in defense of family and self, and also in defense of others” (6).

This means that if nobody physically hurts you, you will always avoid physical interaction.

On top of this remember, you know why you are doing what you are doing, but others might misunderstand your actions. They might think you are a criminal, a thief, a terrorist. It’s your responsibility to behave in such a way nobody thinks you are one.
THM: Don’t dress up in crazy military clothes, carrying three knives, with a gun on your side, a helmet, and an anti-nuclear radiation mask. You might look a bit suspicious.

“Less is more and more is less, more or less” (7). Travel light, bring the bare minimum. You will need very few things. You might want to feel the hitch to buy rappels, night visors, retractable sticks, invisible ropes, and other expensive tools, but the reality is you will need very little of that. Read out loud some old school stoicism down here and let it brainwash you. They. Were. Right!

“Do not indulge in dreams of having what you have not, but reckon up the chief of the blessings you do possess, and then thankfully remember how you would crave for them if they were not yours” (8).

5. Do things with style

Overall, don’t forget – it’s always about style. The way you react, the way you move, the way you face problems. As my friend, Gato once said: “Parkour is about lifting a slice of cake with a fan” (9).

Nobody wants to be the bull in a china shop. Remember a cat moving through balconies, a snake slithering in leaves, an eagle gliding in the sky above the mountains. The deepest efficiency hides in aesthetics.

– Learn a thing or two about mimetism, it will be useful.
– Do not film sensible things.
– Do your thing, use minimal interaction with others.
– Silence is your best friend.

– Take responsibility for your actions: fix if you break and no suing for any reason.
– If asked to leave, leave, immediately, if asked to explain do it with care.
– Be kind, aware and serious about your actions.

– Always carry a micro first aid kit. What, don’t you have one already? Make one now.
– Tell at least one person where you are and when you will be back.
– Learn a thing or two about disguise, diplomacy, and confounding.
– Know/Check your surfaces.
– Have a plan B.
– Stay aware at all times. Every smell, every sound, every motion, counts.

– Being minimalist doesn’t mean to go around naked. I.e. you wouldn’t go into the sewers with flip-flops. Wouldn’t you?
– Nothing is as important as a good head flashlight.

– The style is your passport, don’t forget it at home.
– A good attitude can overcome the toughest of the problems.

It’s not enough to do, we must do and reflect.

Garrett, quoting Downfallen (an Urban Explorer and Base Jumper): When we see a sign that says, “do not enter” we understand that this is simply a shorthand way of saying “leaving protected zone: demonstrate personal accountability beyond this point”.

I stand behind every word written in this document, to be transparent and real, to not be a hypocrite and ultimately to give a voice all those people whose curiosity goes beyond the limitation the modernity wants to impose.

Until next time,
Marcello.

7) Boer, S. (2015). Less is More, and More is Less, More or Less: The Historical Progression, Aesthetic Characteristics, and Physical Limitations of Minimalism. Retrieved from